Meet Me in St. Louis (how do you craft while on vacation?) & small giveaway 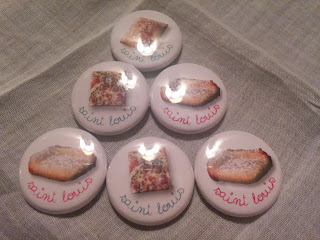 Karen and I had a fantastic trip to St. Louis last week. I'd never been and she didn't mind going back. We visited the Gateway Arch, Forest Park museums, and caught a Cardinals game, of course (she's a diehard baseball fan and I like to indulge her). We found the River City to be a friendly, welcoming city that was easy to tour by public transit, both bus and train.

We both love getting off the beaten track so we decided to check out Cherokee Station, a street that sounded a lot like the Short North in Columbus, OH. There are many antique stores, Mexican eateries, and bakeries. Elaine's sandwich shop was a delicious place to recharge after walking and shopping. I prefer the wraps to the sandwiches, which are made on delicious but very dense bread from a bakery down the street.

While in Cherokee Station we popped into a store called buttonmakers, 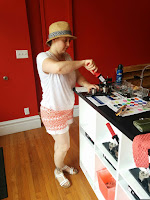 hoping to buy some souvenir pins for friends and family. They didn't have any ready-made, but Rob scrounged up some pre-printed art samples they'd planned to trash and let us make our own buttons for just $1 each! Using a button machine was very easy and this activity would be fun for anyone age 6 and up. If you aren't in the St. Louis area but want custom buttons, check out their website buttonmakers.net. They are so nice! SMALL GIVEAWAY:  first person to comment on this post will get one of the pizza buttons, shown being made at the right!

I was delighted with the simple designs featuring classic St. Louis foods. Shown below are gooey buttercake, St. Louis style pizza, and toasted ravioli. We didn't get around to pizza, but did try the cake after dinner at Copia one night. It is one of the most delicious things I've ever tasted. The best way I can describe it is like cheesecake evolved to the next level. It's the X-men of richness. We tried the toasted ravioli at a restaurant near the stadium but at the risk of incurring the wrath of the locals, I didn't like it nearly as much as Olive Garden's. With so many great things to try in the city,  I can see why Tums created this funny ad campaign: 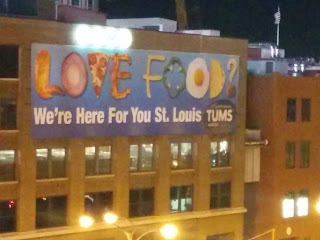 We found ourselves with way too many things to do on one trip, so will venture back in a year or two after the new park by the arch is complete. Here is a photo I took from the top of the arch and from the park near the Old Courthouse.

It's very interesting how my Nexus phone automatically makes photo albums from my travels, stitches together photos into panoramic views, and recognizes my itinerary. Super helpful, but a little creepy, too. What's a good word for that? 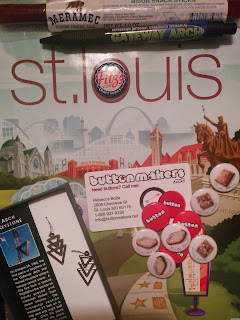 We bought a pair of earrings featuring the arch's keystone shape from the gift shop. We'll make these into matching pendants, a grown-up version of bff necklaces. :-) It's easy to do by removing the ear wires and adding a jump ring or two.

Thanks for stopping by and keep living the qute life!